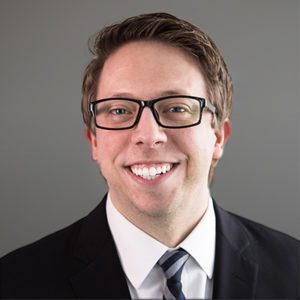 Brian Lagesse (pronounced la-GUESS-see) is passionate about fighting on behalf of clients affected by eminent domain laws in North Carolina because has always felt compelled to use his talents to further his community. But it took some time to get there.

Before Brian went to law school, he was a project manager at one of the largest Department of Defense aerospace contractors, where he had Secret-level security clearance and oversaw the maintenance of U.S. Navy aircraft.

However, after about a year of working there, it started to feel like he was just another cog in the machine and that he wasn’t helping anybody (except maybe helping the corporation make more money). There was nothing personal about it. He wanted to be in a career that would allow him to help people — not a giant, abstract corporation.

“When I asked myself what it was that I really wanted to do with my life and my talents, the answer I kept coming back to was to go into law. The way I think about problems and my analytical approach to problem-solving really lent itself well to the practice of the law,” Brian said.

Before Brian joined our firm and the James Scott Farrin legal team in 2020, he served as the head of the NC Title Resolution Department at another law firm, where he represented large financial institutions in complex real estate matters.

In that position, Brian spent most of his time solving complex real estate issues. He negotiated zealously on behalf of his clients and he often went to court to remove any clouds on titles. But it still didn’t feel like he was getting to help people.

Now, after joining the NC Eminent Domain team, he’s found what he’s sought, and he loves putting his knowledge and finely-honed negotiation skills to the test for his clients.

“What really excites me about eminent domain as a practice area is that we get to go in and provide real help to individuals who may be getting taken advantage of by the NC Department of Transportation, whose job is to take your property and pay you as little as they can for it. I feel proud in representing ‘the little guy’ — our clients — and making sure their constitutional rights are being upheld.”

Our Founding Fathers felt that the right to own and keep our property was so important that they put it alongside our rights to free speech, free exercise of religion, and protection from unfair criminal proceedings.

“Yes, the government can take your property, but the citizens — you — must be justly compensated for the taking, which was a pretty novel idea at the time. Without that crucial aspect, you wouldn’t actually own your land, you would just be borrowing it from the government until they wanted it back. Because of the Fifth Amendment, you own your property and have the right to fight for just compensation. I’m honored to continue that good fight for you,” said Brian.

When you meet him, you will be greeted with a big smile and the feeling you’ve been friends for your entire life. But don’t let his East Texas country boy’s demeanor fool you. He was a champion at his law school’s intramural negotiation competition and a two-year member of Law Review, and he’s ready to take on those who would take advantage of his clients. He is a competitor at heart, whether he’s in court for your case, or on the court playing basketball with his friends. He brings his champion’s mentality to every client he represents, and he is ready to fight for every dollar that you may be owed.